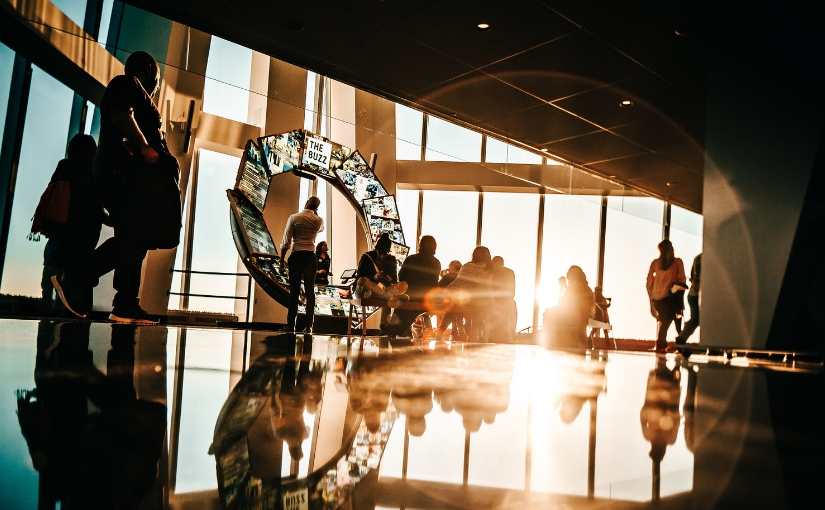 After the success of What a working day will look like in 2038, we decided to paint another picture of the not-so-distant future with this new chapter of our story.

Here’s what tomorrow’s working world could look like as innovations like 3D printing become ubiquitous and creativity is stimulated by augmented reality and flexible work organization.

As she leaves home and speed walks up the avenue, Arianne Smith takes a look at her connected watch. The holographic display shows 8:12 a.m., the numbers floating a few centimeters above the screen. “Just in time,” the young woman thinks as she walks the last few meters to the terminal building, where a vehicle with an aerodynamic fuselage and short retractable wings awaits her. She climbs on board, joining the three passengers already seated on its benches,.

She barely has enough time to buckle her seatbelt as the aircraft takes off vertically, with the help of its three electric motors. Once in the air, it spreads its wings elegantly and flies to its destination. Passengers barely have time to check their e-mail or take out a book: within minutes of taking off, the aircraft arrives at its destination and lands gently on the roof of a building in the business district of Providence, Rhode Island. The 30 km between the charming residential suburb where Arianne Smith resides and the downtown area where her offices are located was completed in less than ten minutes. All she has to do now is walk 300 meters to reach her destination.

Speaking of her office, Arianne only goes there two or three days a week, working from home the rest of the time. In 2039, Providence was one of the medium-sized cities boosted by the rise of teleworking and self-employment. They attract many workers fleeing large overcrowded cities in search of lower rents and a better quality of life.

All the buildings in the neighborhood have a green facade. Plant walls have been installed on many buildings in the district to grow locally produced fruits and vegetables for inhabitants. The building our heroine enters is not a company building, but rather an improved collaborative workspace, widely equipped with innovative technologies. In this not so distant future, the economy has been profoundly transformed by the gradual decline in the number of employees in the working population. New ways of organizing work have emerged to adapt to the realities of the 21st century economy. Arianne Smith is neither totally independent nor really employed by a company. She is a member of a team of about ten people, with whom she has now been working for several years. This team is composed of young architects who have the task of rethinking urban planning in line with new technologies, all while considering local specificities and cultures.

The smart city as it was devised at the beginning of the 21st century, identical throughout the world and without local colors, is an old idea. Thinking of the city of the future means modernizing without erasing the charm of old buildings, local customs and traditions and the thousand differences that make up the richness of humanity. This is the mission Arianne Smith and her team have undertaken. As they obtain contracts, they are grafted onto larger structures, and become autonomous again once the mission is accomplished. The entire team is a kind of an independent super-worker, which companies use as an individual contractor.

However, she’s not going to the office to meet them. In fact, most of her colleagues are spread throughout the United States, or even in other countries. The team even includes a citizen of Atlantis, a floating city-state off the coast of California, created by American mogul Peter Thiel and Japanese chemist Masaki Takeuchi.

In 2039, software is entirely designed for collaboration and allows teams like hers to work together despite the distance. Our heroine likes to go to this former warehouse, which has since been transformed into a workspace, for the friendliness, human contact and state-of-the-art equipment she uses for her work as an architect.

The era of the holographic computer

After serving herself an Oolong tea, chosen from a row of self-service jars, Arianne Smith settles down at one of the large wooden tables where many individuals are already sitting despite the early hours. Her computer is considerably different from the ones we use in 2019. Goodbye to the keyboard, the mouse, and even the screen. The device is a simple, ultra-thin and resistant glass plate, on which a holographic interface is deployed, which she handles directly with her hands. For more complex work, a pair of augmented reality glasses can generate large shapes, definitively turning IT into the world of 3D. This technology is ideal for her work as an architect. This type of connected object has invaded the office of the future: most workers are equipped with smart watches, virtual reality headsets and all kinds of devices used for creativity.

That said, almost none of the individuals present actually own the equipment they use to work. For example, Arianne Smith did not buy her computer, she purchased a subscription service from a major computer manufacturer. For a monthly or annual payment, the company provides her with a computer, which it updates, repairs if necessary, and changes every two years for a newer model. At any time, she can update her offer to receive a more or less efficient device, increase the amount of memory available on her computer or order an additional connected device, with her regular sampling being adjusted accordingly. Once confined to a few niche sectors, such as the press or television, the subscription model has now invaded most areas of the economy, and formulas are offered by car manufacturers, airlines and even luxury brands.

After a morning of work, Arianne Smith heads to the collective kitchen to eat. She opts for a pan-fried vegetables freshly picked on the wall of the building, accompanied by a fillet of sea bream roasted in the oven. Next to each dish, a small code that she can scan with her watch allows her to trace the entire life cycle of the product. The scan displays information about whether the vegetables have been grown without pesticides, that fish have not been caught in an area where the activity is prohibited, and that they have not been transported under unsanitary conditions. The combination of the Blockchain and the Internet of Things allows this perfect transparency of the value chain, which has become a source of consumer confidence and trust. Other fresh and local products are delivered daily by drones, widely used for short distance deliveries since specific air corridors have been assigned to them.

Arianne Smith has lunch with two other regulars in the workspace, designers of virtual reality video games. One of them enjoys a burger, whose meat was entirely made in a lab while the other colleague opts for a pizza printed in 3D on a brand-new machine recently acquired by the office. 3D printing is used to make all kinds of things: printing food products, buildings, cars, furniture and various household appliances. The office chair Arianne Smith uses when working from home was printed on command, after she provided a number of personal measurements to the service provider company. The chair is designed to perfectly fit the shape of her back and correct her posture, which is damaged from sitting all day. Like many of these now ubiquitous technologies, the service is tailor-made and inexpensive.

A hologram for Quanzhou

While talking to her two friends, Arianne Smith almost misses an afternoon meeting scheduled with her team. Fortunately, her personalized virtual assistant reminds her in time. When she gets to her meeting, she takes advantage of the collaborative workspace and its full range of state-of-the-art videoconferencing equipment, supported by a brand new 7G network. When she connects, after putting on a pair of augmented reality glasses, most of her classmates are already there, and, if not for the somewhat transparent and ghostly look of their silhouettes, she would swear they’re in the same room. While the majority of the team speaks English, there are also Japanese, Chinese and Ukrainian speakers who are unfamiliar with the language of Shakespeare. Fortunately, GoogleChat, Google’s instant translation tool, translates speech at a glance, and conversations are as fluid as if everyone was talking the same language.

The team meets to discuss a major project that has just been assigned to them by a new client. The aim is to build a cultural and tourist attraction that uses new technologies to make history accessible and fun, all in the city of Quanzhou, China. The teammates, who agreed on a workflow that mobilizes the resources of augmented reality, have each considered different approaches on their own and are meeting to compare ideas.

Mori Botchan, a young Japanese architect, begins by presenting the team with a device that affixes a filter on buildings and the environment using an augmented reality helmet, allowing so passers-by to stroll through the streets of Quanzhou as they were at the time Marco Polo visited them. The team applauds this tremendous work in historical documentation. Mike Coles, follows, presenting from his native Oregon, unveiling his life-size reconstruction of a 12th century Buddhist temple. In the end however, Arianne Smith wins the vote with her interactive statue project, which traces the major events of the Opium Wars in Quanzhou, using life-size holograms with a host of historical details.

All she has to do now is book a ticket to Quanzhou. Unfortunately, even in 2039, supersonic flights have not yet become accessible to all, and it takes almost 20 hours of travel. “This will be an opportunity to watch the countless augmented reality movies on my list” she thinks, as she books her ticket for next month.

What will appointments and meetings organization look like in the future? You can already have a preview: try Slash! ?

SHARE THIS :
2019, a productive year?
When it comes to AI, is a Black Mirror scenario actually possible?