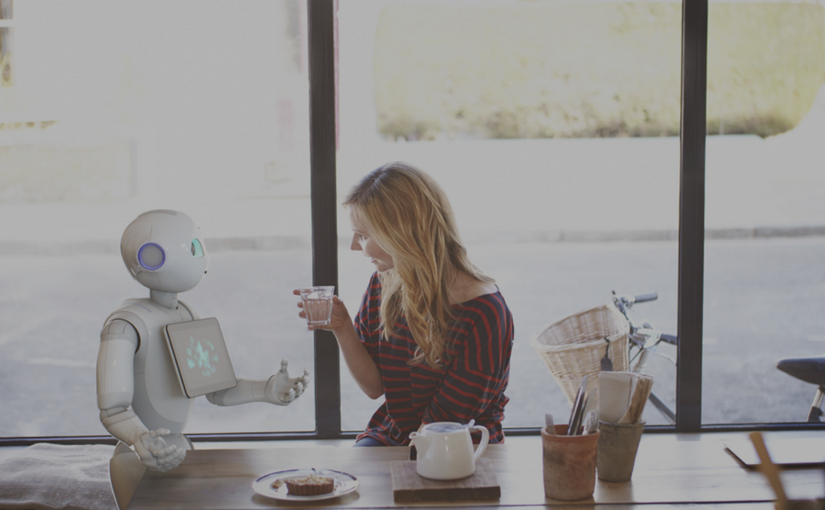 When Robots and Humans Work Hand in Hand

Recent progress in Artificial Intelligence has given rise to fears of technological unemployment, when a large part of the population will be replaced by robots in the workplace. That said, a number of companies operating in the sector are proving that these machines are meant to work with humans rather than replace them.

On Saturday, May 27, Google’s AlphaGo faced off for the third time with world-renowned professional Go player, Ke Jie of China. Go is a board game, known for its complexity, it has long been considered too difficult for a computer to play because the number of possible combinations needed to win is much greater than the number of possible failures. However, AlphaGo surprised the public last year when it played head-to-head with one of the best players in the world, Lee Sedol of Korea. And after defeating Ke Jie 3 to 0 this weekend, the software has essentially proven its superiority. Some may recall the theory of the Singularity, a subject often defended by American entrepreneur and futurist Ray Kurzweil, and will see this as proof that no task is too difficult for AI, and that suchprogramming will surpass human intelligence in all sectors.

In the workplace, this idea raises a number of concerns. In fact, there are countless studies conducted on unemployment caused by technological advancement replacing humans in the workplace. One of the most well-known studies is that of economists Frey and Osborne. The study, published in 2013, posits that 47% of american jobs are endangered in the coming decades. Other studies announce an increase in unemployment rate, reaching as high as 50% and up to 75%, when humans become nearly obsolete in the face of machines. This concern is reflected in popular culture through dystopian television series such as 3% or Tripalium. These shows describe futures in which inegalitarian societies are driven by a privileged (employed) few, while others live in misery. Important figures in Silicon Valley are also sounding the alarm: Elon Musk, founder of the Tesla and Space X, also shares his fears regarding unemployment caused by machines.

Rowan Trollope, Vice-President of the Internet of Things department at CISCO Systems is more optimistic. For Trollope, it is relatively easy to imagine jobs that could be eliminated by technological progress, but to imagine the new jobs that will be created in the wake of such advancements is much more important. “As a science-fiction fan, I love to quote Spock from Star Trek: ‘In observing the history of the cosmos, one realizes that it is easier to destroy than to create.’ Who, could have for example, have foreseen the gaming industry boom? Or the fact that writers could today be recruited to write dialogues for virtual assistants?” he asks.

In fact, a number of robots have been created to work collaboratively with humans, rather than replace them. “Making sure that robots and humans can work together is one of the guiding principles of the robotics industry,” says Andra Keay, managing director at Silicon Valley Robotics, an industry group specialized in the conception and commercialization of robots. According to Keay, this kind of collaboration could be particularly beneficial in the industrial sector as today’s technology matures enough to offer significant increases and improvements in safety. “Today’s robotic arms are safe enough to work in harmony alongside humans and that’s a new development. They no longer have to be in a separate room.”

One can imagine the possibilities of using machines for the service of humans. San Francisco-based company Carbon Robotics commercializes robot arms designed to work on assembly lines for manufacturers. The company wishes to democratize the use of this technology by lifting two important barriers to adoption. “90% of tasks that could be automated are still operated by hand because available tools are too expensive or complex to use,” said Rosanna Myers, CEO and cofounder of Carbon Robotics. “Today, if you wanted to automate a simple task on an assembly line, you’d have to hire a contractor to program the robot and to train employees to use it. In addition, a number of companies use their own programming languages which are necessary to use their product.” The robotic arms sold by the company are designed to help workers on the job, and can be directly manipulated by them. “We have used computer vision in order to remove the difficulties associated with programming. In fact, it isn’t even necessary to know the technology’s inner workings in order to use it.”

Putting machines in the service of humans is also the credo of Russ Angold, founder of Ekso Bionics. With its base in San Francisco, the company has developed an exoskeleton destined for workers that operate all day in uncomfortable and physically trying positions, in order to reduce fatigue and safety risks. “The idea is to increase workers’ endurance in a number of industries where the labor is particularly demanding. This includes activities that ask workers to manipulate heavy objects above their heads such as one sees in the automobile industry, technical services in the aviation industry and in the countless jobs that require ceiling work (electricity, plumbing, fire alarm installation etc.). The goal is to make these jobs less difficult and reduce the risk of accidents. Injuries to the shoulder, which are typical in this line of work, are one of the most common injuries in the United States.” Angold adds that while it keeps workers safe and healthy, the technology also helps individuals who wouldn’t otherwise have the necessary physique to have careers in these fields. Like Rosanna Myers, Angold prioritizes proposing easy-to-use technology as well as ensuring that it complements human skill. ”The exoskeleton is very simple to use and doesn’t require extensive training. It combines the endurance and physical force of the machine with the human capacity to make decisions and rapidly adapt to different situations.”

Fetch Robotics is working on autonomous robots built to operate in warehouses. Once more, human collaboration is key: the robot is in charge of displacing heavy objects (difficult for humans to do), while humans transport the robot’s products on and off shelves, decide which products to displace and survey the maintenance of robots. The worker chooses which object to displace, places it on the robot and indicates the place where it must transport the object with the help of a tactile screen on the machine. We spent a lot of time assuring that it’s easy to use, even for individuals lacking knowledge of robotics.” explained Melonee Wise, CEO of Fetch Robotics, at the most recent Collision technology symposium in New Orleans.

From concierge to medical assistant

But the collaborative possibilities for humans and machines aren’t limited to the industrial and logistical industries. Robots can equally play a role as concierges or advisors, as is shown in the case of Pepper the robot, created by Franco-Japanese company Softbank Robotics. Pepper was designed to greet and guide guests in boutiques. It has a tablet allowing it to look at different aspects of each product in the shop. Pepper plays a bit of a telephone operator’s role in the sense that it answers the most basic questions posed by clients allowing vendors to focus on demands requiring their expertise. “Pepper is a robot with simple functions, that could not replace a human but can still give assistance and procure information for clients,” explained Rodolphe Gelin, Innovation Director at Softbank Robotics, at Collision. “For example, SNCF installed Pepper in a number of stations where it can help users with general questions such as “Where is the closest bakery?” or “Where can I grab a drink while I wait for my train?” SNCF agents don’t have the time to answer such questions so Pepper helps users have a more agreeable experience.” Relay, a robot created by robotics company Savioke, proposes room service in hotels. “The goal is to allow hotel employees to give the best service with assistance from the robot. Relay is designed to transport objects from reception to hotel rooms: the receptionist confides the package to Relay and the client gets the delivery at his/her suite. This both speeds up room service and satisfies clients at once.” said Tessa Lau, Savioke’s Technical Director.

The possibilities are equally rich in the medical sector, always with the idea of automating repetitive and fastidious tasks to allow humans to concentrate on activities where they work best. According to Andra Keay, the transport of blood and tissue samples in hospitals could have a lot to gain from becoming automated. “The samples must be transported with great caution, and they must arrive to the right destination, intact, and often doctors find that they must make a number of back-and forth trips to complete this task. If the transport were performed by robots, they could spend more of their time working on analysis and treating patients. In the same vein, how much time does a pharmacist spend in the aisles, searching, arranging and classifying items?” Carbon Robotics also sees fruitful applications for its robotic arm in medical research. “The majority of lab-work is manual: scientists conceive of a study, analyse the results and spend a lot of time moving samples around, filling and emptying test tubes and so on. The reason these tasks have not yet been automated are the same as for the industrial sector: the costs are too high and the equipment too difficult to use. That being said, the tasks the robots are designed to accomplish are remarkably similar: the robots must pick things up and put them down, displace them, choose the most efficient movements and avoid obstacles,” said Myers.

Scientist Maja Mataric, of the University of Southern California, has designed robots capable of helping patients through a period of rehabilitation. They would be charged with assisting patients in rehab by working them through their daily exercises and routines for several hours a day. Patients would also benefit from the motivation this provides, one that few medical professionals can assure because of limited resources. Rehabilitation is a sector in which Ekso Bionics exoskeleton operates as well. “Repetition is key to healing. Thanks to the exoskeleton, a patient looking to use his/her legs can achieve up to 100 assisted steps per day, contrary to 12 unassisted, allowing the patient to heal faster,” explained Angold. Similarly, Sense.ly proposes a virtual assistant service for patients with chronic illnesses, which allows doctors to monitor patients more efficiently and to quickly diagnose if medical intervention is necessary. This frees up time for doctors to spend more time with patients and establish human contact.

In brief, these examples show that a robot isn’t meant to be the enemy of the worker but rather an assistant to be placed in his or her service. And I haven’t talk about AI yet 😉

SHARE THIS :
Managing the change in the “Human” part of Human Resources
The Sky’s The Limit : A new round of funding for Julie Desk